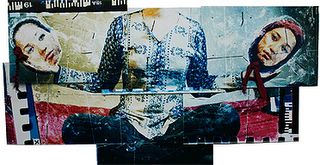 The Guardian and Chrenkoff have an article of hopeful news from Iran:

…With an estimated 75,000 blogs, Farsi is now the fourth most popular language for keeping online journals. A phenomenal figure given that in neighbouring countries such as Iraq there are less than 50 known bloggers (with Iraq the Model leading the way).

The internet has opened a new virtual space for free speech in a country dubbed the “the biggest prison for journalists in the Middle East”, by Reporters sans Frontieres (RSF). Through the anonymity and freedom that weblogs can provide, those who once lacked voices are at last speaking up and discussing issues that have never been aired in any other media in the Islamic world. Where else in Iran could someone dare write, as the blogger Faryadehmah did, “when these mullahs are dethroned … it will be like the Berlin wall coming down …”?

In the last five years up to 100 media publications, including 41 daily newspapers, have been closed by Iran’s hardline judiciary. Yet today, with tens of thousands of Iranian weblogs there is an alternative media that for the moment defies control and supervision of speech by authoritarian rule.