The FBI confiscated the phone of GOP Rep Scott Perry while he was traveling with his family.

Perry said he was approached by 3 FBI agents with a warrant for his cell phone — the FBI had made no attempt to contact his lawyers or him to get the cell phone.

Republican Rep. Scott Perry of Pennsylvania says that the FBI has confiscated his cellphone.

Perry, in an exclusive statement, told Fox News on Tuesday that while traveling with his family earlier in the day, he was approached by three FBI agents who handed him a warrant and requested that he turn over his cellphone.

“This morning, while traveling with my family, 3 FBI agents visited me and seized my cell phone. They made no attempt to contact my lawyer, who would have made arrangements for them to have my phone if that was their wish. I’m outraged — though not surprised — that the FBI under the direction of Merrick Garland’s DOJ, would seize the phone of a sitting Member of Congress,” Perry said in his statement. “My phone contains info about my legislative and political activities, and personal/private discussions with my wife, family, constituents, and friends. None of this is the government’s business.”

Perry asserted in his statement that “as with President Trump last night, DOJ chose this unnecessary and aggressive action instead of simply contacting my attorneys. These kinds of banana republic tactics should concern every Citizen — especially considering the decision before Congress this week to hire 87,000 new IRS agents to further persecute law-abiding Citizens.”

House Judiciary Committee Republicans are now opening an investigation into DOJ Inspector General Michael Horowitz over his involvement in examining the cell phone.

In a letter sent by Jim Jordan, he said it “creates a serious conflict of interest for the OIG in reviewing the Department’s actions.”

Jordan added, “the OIG’s role relating to the seizure of Representative Perry’s phone is inconsistent with your responsibility to conduct independent oversight of the Department and extremely troubling in light of your statutory reporting requirements to Congress.”

A letter sent Monday by Rep. Jim Jordan (R-OH), the ranking member, said such a move by the agency’s independent watchdog “creates a serious conflict of interest for the OIG in reviewing the Department’s actions.” Among the demands made of Horowitz were those for relevant documents and communications, as well as explanations for a forensic examination of Perry’s phone and concerns raised about the seizure. Jordan asked the inspector general to produce this material no later than 5 p.m. on Sept. 12.

Perry, chairman of the conservative House Freedom Caucus, was served with a warrant for his cellphone by three FBI agents while traveling with his family earlier this month. The move was part of a federal investigation into efforts to overturn the 2020 election results, which started with the DOJ inspector general’s office and appears to have extended to prosecutors from the U.S. attorney’s office in Washington. A lawyer for the congressman said Perry is not a target of the inquiry, according to the New York Times.

Here is the full letter: 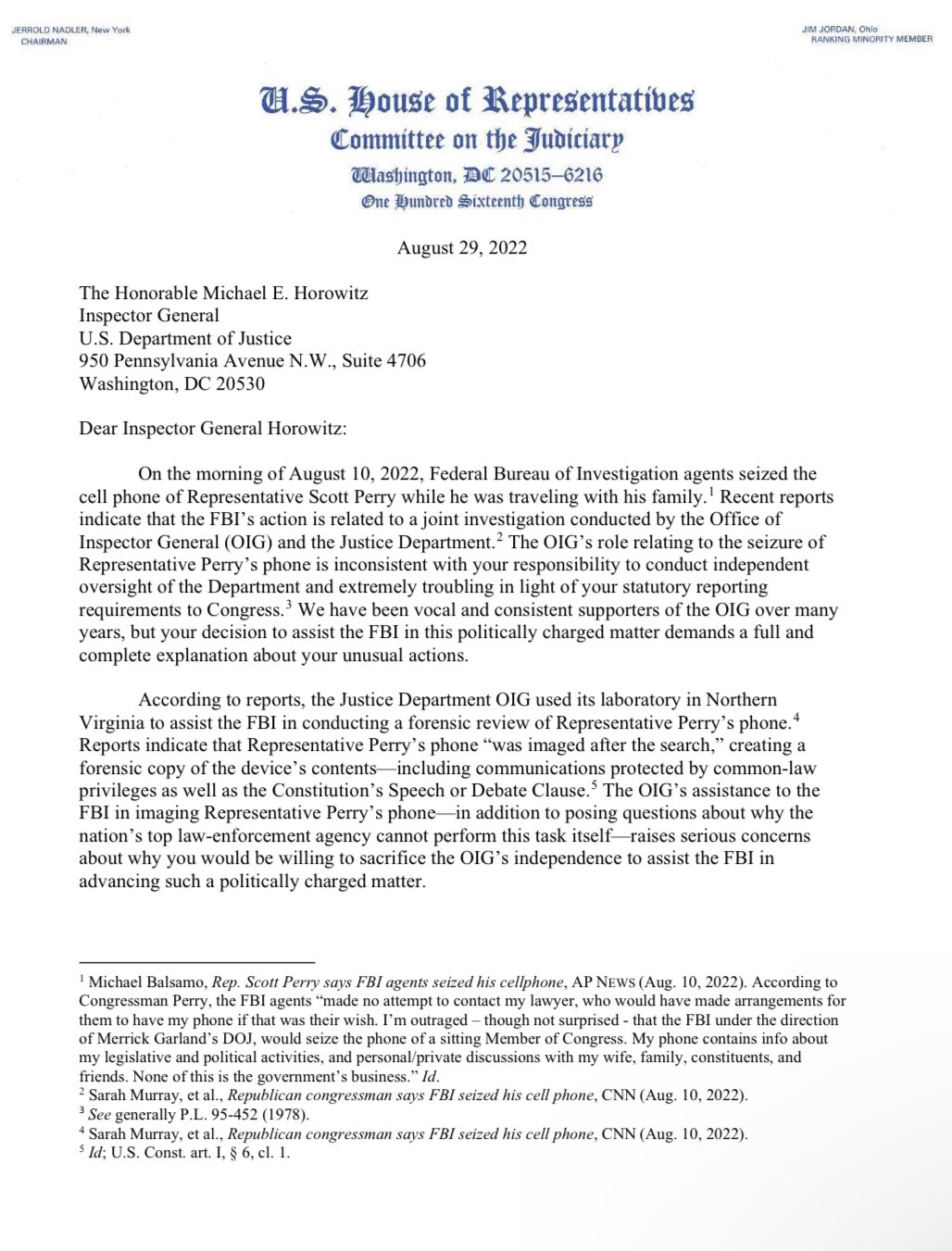 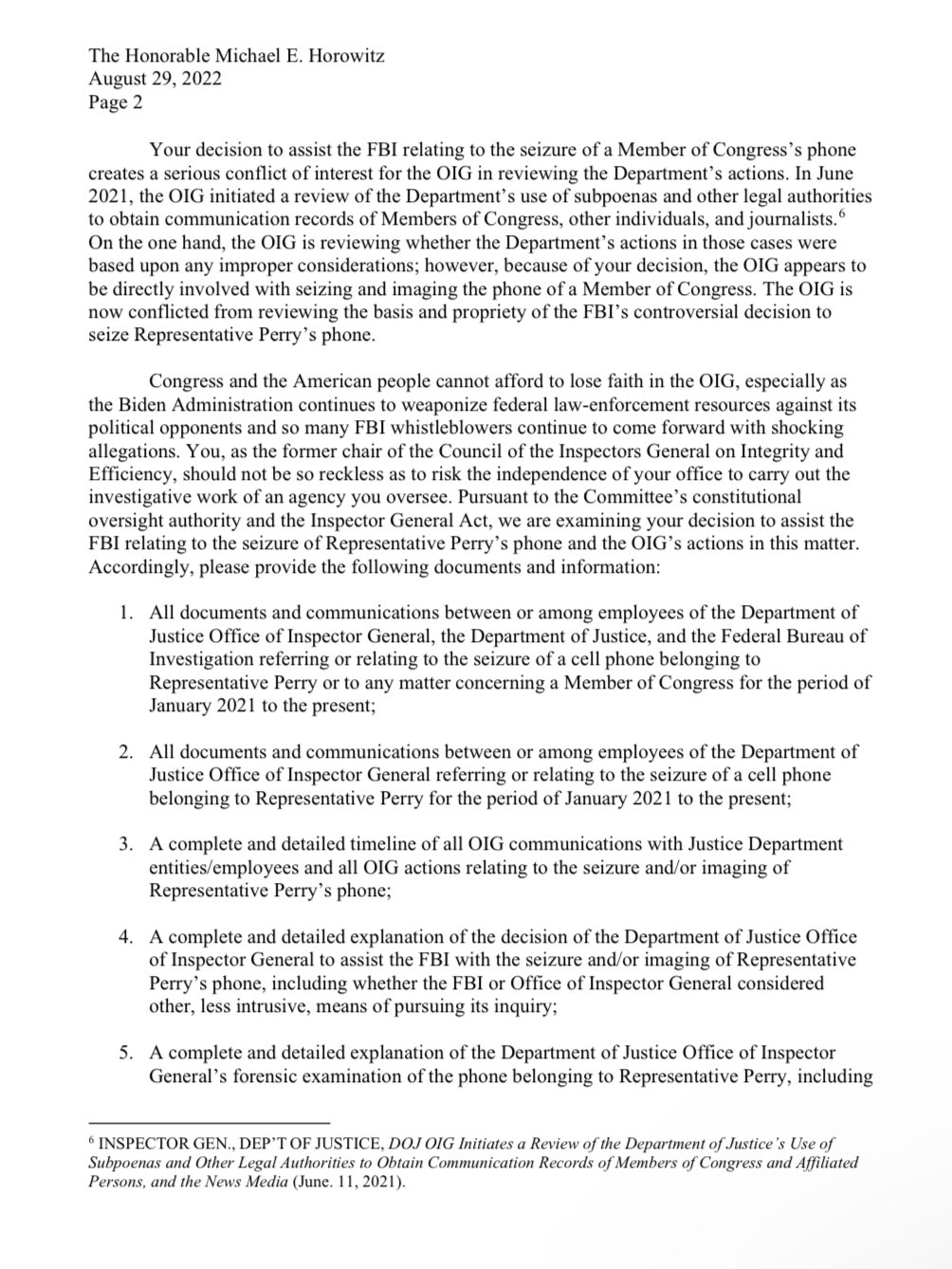 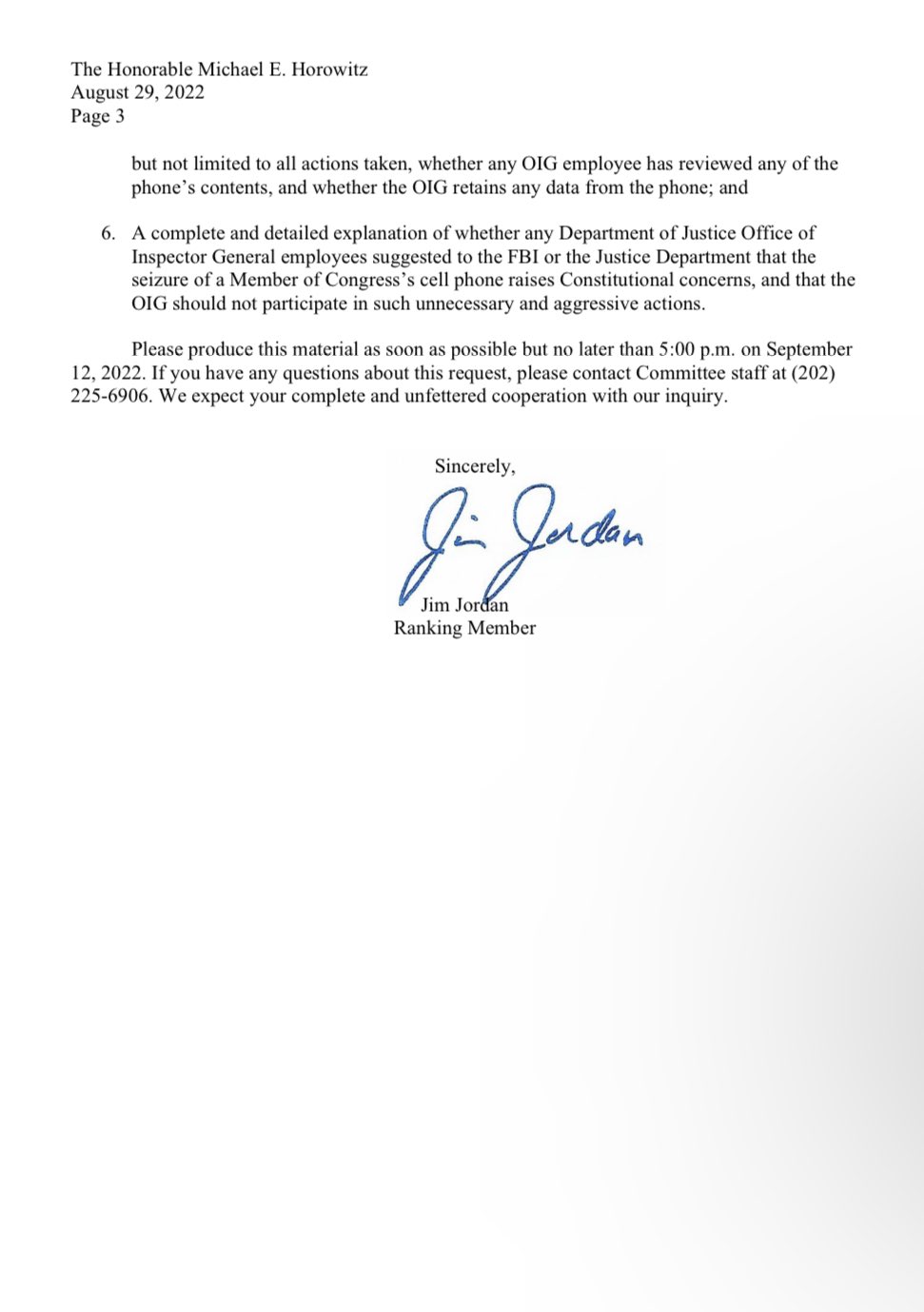