On Tuesday, migrants from Central America and elsewhere, kneeled at the Tijuana-San Ysidro port of entry hoping to obtain the protection of the United States’ humanitarian asylum. The migrants were wearing like-new ‘Biden Please Let Us In!’ shirts which has been gaining the attention of users on social media.

There has been an increase of unaccompanied minors arriving at the United States border from Mexico and the Biden administration has rejected the term ‘crisis’ to describe the increase of migrants at the southern border.

According to Wall Street Journal, “U.S. Customs and Border Protection reported taking 5,707 unaccompanied children into custody in January, an 18% rise from the previous month. The growing number of children in custody is beginning to strain the government’s ability to properly house and care for them.”

Biden is working to process over 25,000 asylum seekers who were waiting in Mexico under the Trump administrations ‘Remain-in-Mexico’ policy through the Migrant Protection Protocol (MPP) program established in 2019 according to Fox News.

The president promised to take in more refugees into the country which has led to the surge of people coming to the southern border with Biden’s promise to have ‘humane’ policy like a proposal where he plans to pay for the transportation and health care cost of the migrant families who were separated at the border under the Trump administration.

Another picture posted to Twitter, one user stated, “They say there is no crisis at the border. But the migrants are sleeping in tents in Tijuana Mexico and wearing shirts like this. Biden created this problem. @POTUS” 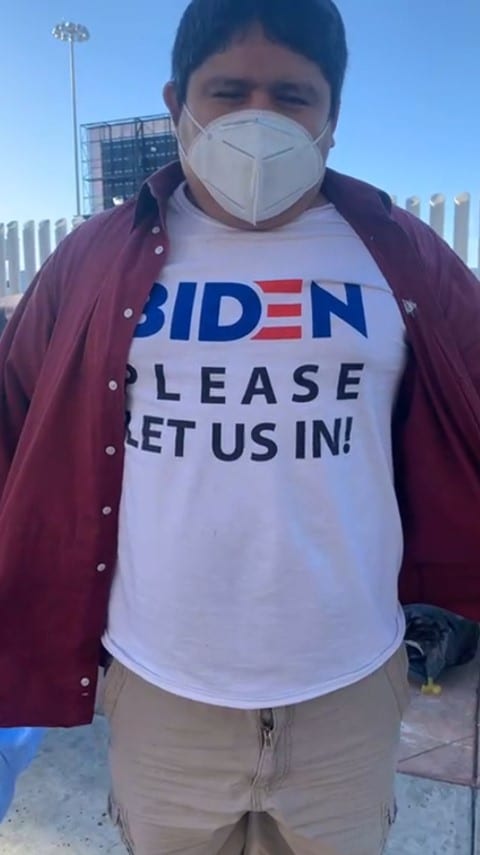 Many are left wondering who paid for the signs and t-shirts of ‘Biden Please Let Us In!’

Who paid for the signs and the shirts? https://t.co/YJr42zJc6l

Footage below shows the migrants kneeling together at the port of entry in their like new t-shirts together hoping to be let into the country.