2020 presidential Democratic candidate Sen. Elizabeth Warren told activists Monday that she would push to end the Israeli government’s “occupation” of the West Bank and Gaza.

Activists from the far left IfNotNow organization asked Warren if she would end the occupation of Gaza and the West Bank.

Warren said she would. 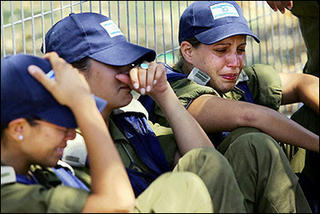 Israeli female soldiers taking part in the uproot of settlers cry in the southern Gaza Strip settlement of Neve Dekalim. Israel has occupied the Gaza Srip for 38 years. (AFP)

“Israeli troops stormed a Gaza Strip synagogue and dragged out screaming Jewish settlers and their supporters on Thursday as Israel’s pullout from the occupied territory shifted into high gear.”

Hundreds of unarmed soldiers and police swept into the main Jewish house of worship in the largest Gaza settlement, Neve Dekalim, to end a two-day standoff with hundreds of ultranationalist youths who had defied orders to leave. 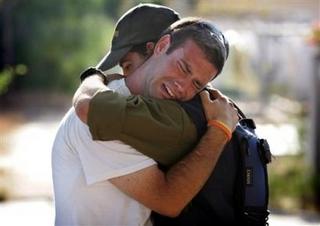 A Jewish settler weeps on the shoulder of an Israeli policeman, as Israeli troops evacuate the Jewish settlement of Neve Dekalim, in the Gush Katif bloc of settlements, in the southern Gaza Strip, Wednesday, Aug. 17, 2005. (AP)