President Trump and the White House have been quiet the day after Christmas as one of the planes used as Air Force One departed Joint Base Andrews just outside the Nation’s Capital at midnight and flew east over Europe before going silent late Wednesday morning.

The Gateway Pundit has been following reports online by small accounts about the plane but chose not to publish because of security concerns President Trump might be making an unannounced trip to visit troops in a war zone. However, Breaking 911 and Reagan Battalion published reports about the plane to wider audiences.

White House reporter for Roll Call John T. Bennett noted the lack of activity at the White House Wednesday, “The White House was eerily quiet Wednesday. No presidential tweets. The West Wing was still — the lights remained off around 11 a.m. in the suite that houses the offices of Bill Shine and Sarah Huckabee Sanders”…”Day Five: No Marine posted outside West Wing as partial government shutdown drags on. No Trump tweets today. Eerily quiet at White House amid crises… – at The West Wing“

The White House was eerily quiet Wednesday. No presidential tweets. Rhe West Wing was still — the lights remained off around 11 a.m. in the suite that houses the offices of Bill Shine and Sarah Huckabee Sanders. https://t.co/lc1p8Y9RqJ via @RollCall

Earlier, the Twitter account CivMilAir tracked the departure from Andrews of one of the Air Force One planes, a VC-25,  flying under a non-presidential call sign, “RCH358”. A plane spotter in Yorkshire, England posted a photo taken Wednesday of  the VC-25 flying high overhead. 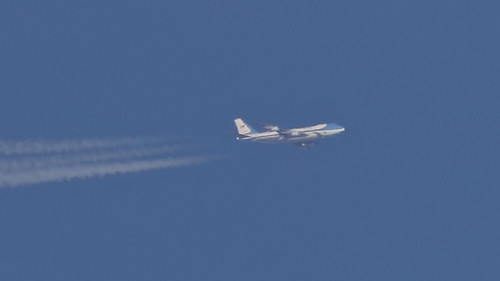 The last tweet by the prolific Presidential Trump was Tuesday about 6:18 p.m. EST.

I hope everyone, even the Fake News Media, is having a great Christmas! Our Country is doing very well. We are securing our Borders, making great new Trade Deals, and bringing our Troops Back Home. We are finally putting America First. MERRY CHRISTMAS! #MAGA

After the plane crossed over Hungary the tracking display ended.

NBC News criticized Trump on Tuesday for not visiting the troops over Christmas with an article headlined, “Trump Becomes First President to Since 2002 Not to Visit Troops at Christmastime.”

While it is unconfirmed what Trump is doing Wednesday, presidential trips to visit troops in war  zones are not done spur of the moment. They take weeks of quiet planning with a select group of reporters invited to travel but sworn to secrecy. The Air Force however chose to not hide the flight from Andrews until the VC-25 was across the Atlantic and over Hungary.