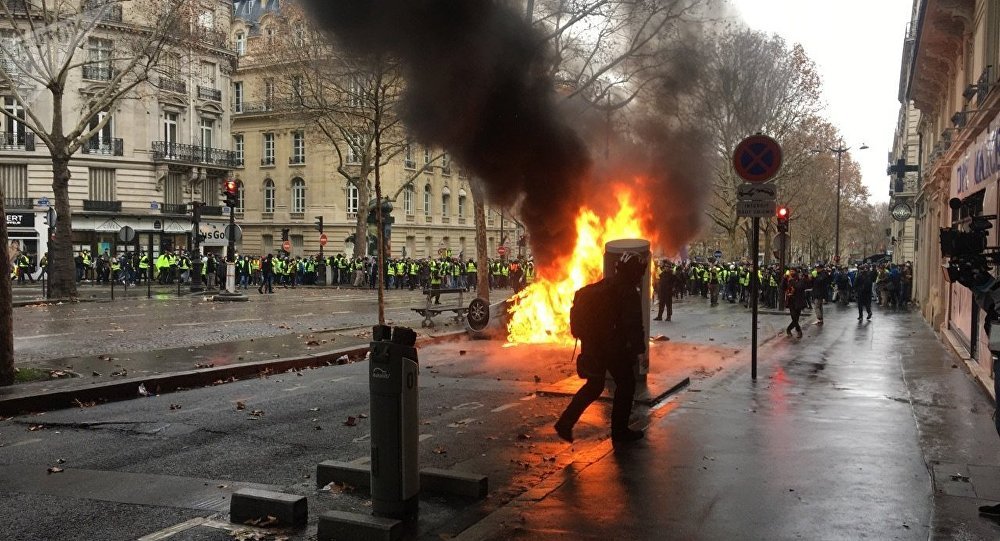 The head of a French police union has expressed fears that this weekend’s anti-government protests could see the deaths of both protestors and law enforcement on the streets of Paris.

Exhausted and over-stretched units struggling to maintain order will be compelled to defend themselves from rioters and looters, Yves Lefebvre told BFMTV earlier this week, raising the possibility of lives being lost if police are forced to act in ”a state of legitimate self defense.”

Calling on President Emmanuel Macron to take concrete measures to diffuse escalating tensions, the head of the Unité SGP Police union spoke of CRS (French riot police) commandants’ fears of losing men if the situation degrades further, and of the possibility of loss of life amongst protestors.

Billed as ‘Act IV‘ by Gilets jaunes (Yellow vest) organizers, the fourth consecutive weekend of protest planned for the French capital is taking shape as tens of thousands of hi-vis wearing citizens organize via social media to attend anti-Macron events, primarily a march between the Place de la Bastille and Place de la République but also at the Champs Élysée, the Eiffel Tower and the Élysée Palace.

A spokesman for the union has expressed concerns that there could be loss of life amidst the ranks of its members, calling on police to stand down rather than face injury or death in clashes with the public.

”Don’t let yourself be injured, scarred or killed for those that consider you canon fodder”, the extraordinary statement continued. ”Think of you, your families and those close to you.”

Encompassing myriad issues beyond fuel tax hikes, the Gilets jaunes are calling for the introduction of a citizens’ referendum initiative into the French Constitution. The insertion of such a provision would allow for citizens to propose legislation, to overturn unpopular laws, and to have the power to recall politicians via plebiscite.

Measures announced by the government earlier this week, which included a delay by one year of the introduction of new carbon taxes, appear to have aggravated disenfranchised French citizens and were quickly characterized as ”crumbs” insufficient to calm public anger.

Paramedics, farmers and truck drivers have in recent days announced strike actions, and French social media is awash with images of ongoing blockades and protests across the country. Multiple events, some using imagery from the French Revolution, are being organized for strategic locations across the capital, with such themes as ”Macron’s Farewell Party” and ”To Arms, citizens!”

A leading figure within the Gilets jaunes, Eric Drouet, has called for protestors to march on the Élysée Palace, home of President Macron, prompting further fears of confrontation with police, some 8,000 of whom will be mobilized in Paris over the weekend. Another member of the movement has called for the dissolution of the Assemblée nationale, the French parliament.

According to Paris daily, L’Express, CRS units have been given the order to fire tear gas grenades directly into crowds rather than to ground. ”It’s the first time that I received such an order. Normally this is prohibited”, a CRS source explained to the newspaper.

Paris museums, theatres and cultural attractions will close this weekend. French Prime Minister, Edouard Philippe, confirmed Thursday that twelve armored vehicles belonging to the Gendarmerie will be in use across the city.

In spite of the violence, largely condemned across French society, a recent IFOP survey puts support of the Gilets jaunes at 72%, a sign of a widespread public disaffection with the country’s political class.

”The genie is out of the bottle, I think”, Anne-Laure, from Paris told The Gateway Pundit. The 29 year-old admitted to having some reservations about Saturday;

”I’m a little worried”, she confessed, ”but I think those running France into the ground, at this moment they are more worried.”