In a scene perhaps reminiscent of film classic, Casablanca, a defiant crowd of two hundred Parisians faced-off with Islamic protestors, Friday lunchtime, attempting to end a street protest which has brought the town center to a standstill each Friday afternoon for eight months.

As reported by the Gateway Pundit in spring, Clichy-la-Garenne, several métro stops from central Paris, has been the scene of Friday street prayers by Muslims demanding the town provide a new mosque in the heart of Clichy – despite the opening, at tax-payer expense, of a new prayer room and Islamic center a short distance away.

At 12:30pm, close to one hundred elected officials from right and centrist parties, wearing saches in the red, white and blue of the French Republic, assembled outside the town hall and marched towards the site of Friday’s Islamic street prayers – a pedestrianized street where two hundred Muslims were gathering a short distance away.

As the republican cortège neared the street protest, a dozen or so elected officials physically attempted to prevent Friday prayers from taking place at which point heavily armed CRS, French riot police, intervened forming a double cordon between the Muslim gathering and the elected officials and supporters.

Led by Mayor Rémi Muzeau, the march pressed closer to the police line, breaking into La Marseillaise, the French national anthem, and advancing until such point as the two opposing groups were mere feet apart.

In the surreal moments that followed, the Muslim faithful – mostly of North African descent, some of whom were dressed in traditional Islamic garb – offered up incantations in Arabic as the elected representatives and longtime Clichy residents continued their patriotic rendition of La Marseillaise, the two sides squaring off against one another.

Minor scuffles broke out on the fringe of the protest and police temporarily struggled to maintain order as tempers flared leading up to the moment the two opposing sides came face to face.

Friday’s protest represents the first time the Islamic protesters were seriously challenged since their street prayers began in March this year, apart from a minor demonstration by secular protesters earlier in the week.

‘’We cannot accept that the public space is occupied in this manner. The mayor is powerless. It’s up to the State to act’’, Valérie Pécresse, regional president of the conservative Les Républicains explained to the assembled media.

The mayor of Clichy, Rémi Muzeau (also of Les Républicains) went further, calling on the French Minister of the Interior, Gérard Collomb, to ban the illegal street prayers, citing his duty to ensure the tranquility and liberty of the town’s 60,ooo inhabitants.

‘‘They present a bad image of our town on social media and to the whole world, and I don’t want that’’, Muzeau explained to RTL radio, calling on the state to finally intervene.

As the Gateway Pundit reported earlier this year, the mayor of Clichy chose not to renew a short-term lease granted by his socialist predecessor, which had allowed members of the local Muslim community to utilize a city building as a mosque and Islamic cultural center. In its place, he opened an Islamic center and prayer room a short distance away.

Representatives of the town’s 20,000 strong Muslim population say the building is badly served by public transport however, and have vowed to continue to observe their Friday prayers in the open on the streets of Clichy until a suitable facility is provided.

Through-out France, a massive expansion of mosque building is underway, including huge ‘cathedral mosques’ nearing completion across the historically Catholic country, a sign of the country’s shifting demographics.

Thus far, there has been no reaction from President Macron’s Interior Minister, Gérard Collomb, to Friday’s events.

French social media lit up in support of the counter protest, Friday evening, with Clichy Mayor, Rémi Muzeau calling the event ”an immense success” and vowing to counter protest the street prayers every Friday until the state takes action. 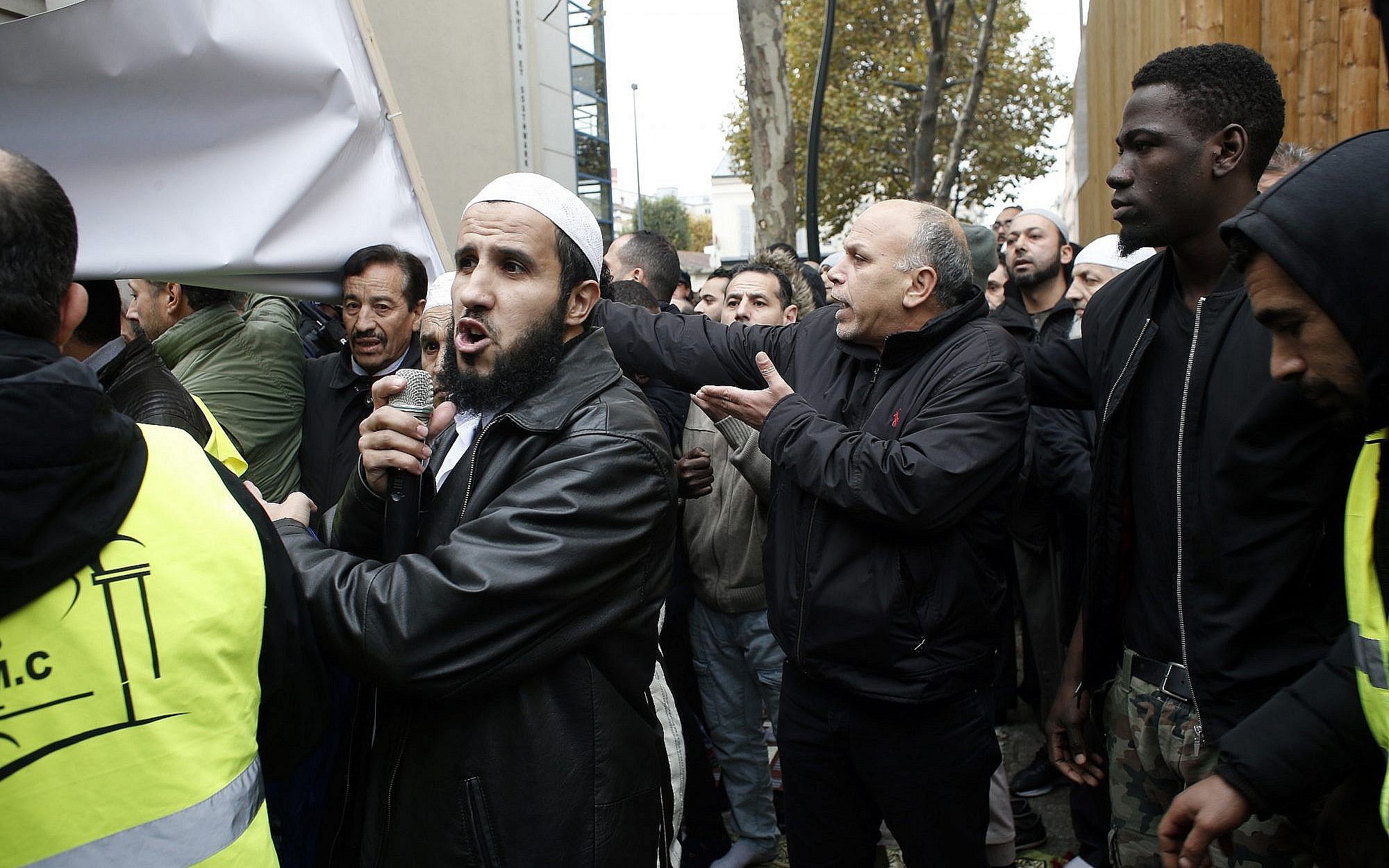