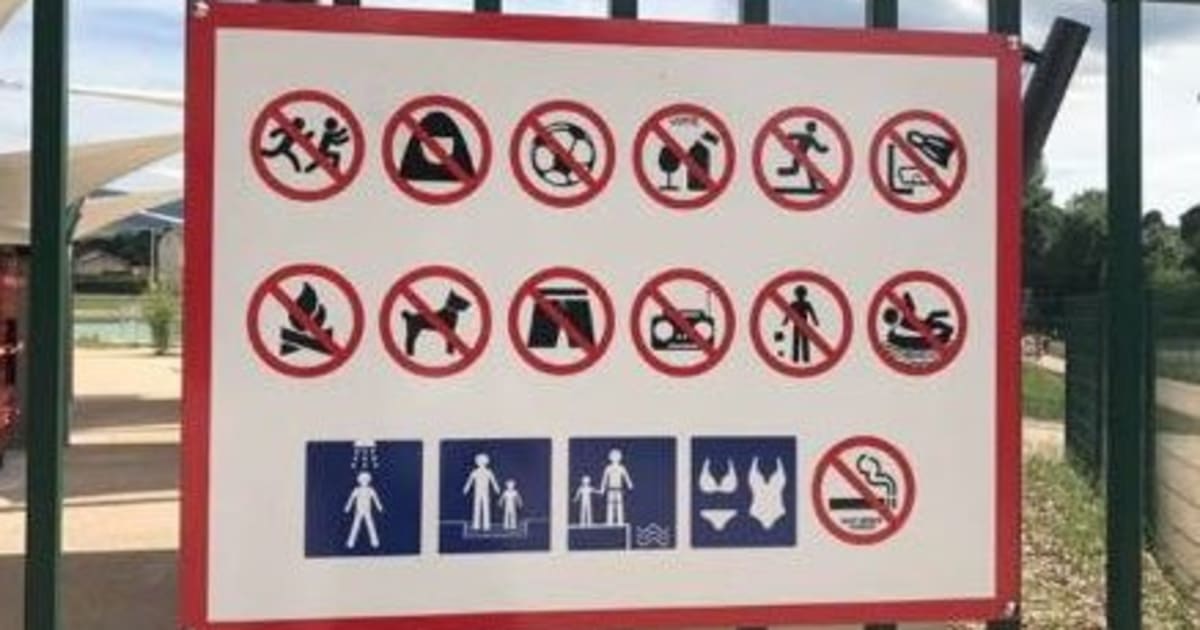 At first glance, it looks like it could be a sign at the entrance to any swimming pool or bathing area, a pictogram in red and white stating prohibited activities; no horseplay, no consumption of alcohol, no smoking, no ball games. Yet one new prohibition on this pictogram is generating controversy; no wearing of the Islamic veil.

Gérard Tardy, author of the measure and mayor of Lorette, a small French town of 4,700 inhabitants, is no stranger to controversy.

Last year, he used the town’s electronic display system to urge the local Islamic population to keep the noise down during Ramadan, following complaints by residents that they could no longer sleep during the month long fast which sees Muslims congregate in the streets late into the night, as across the Islamic world.

At Christmas, the same information system displays ‘’Merry Christmas’’ rather than the secular ‘‘Happy Holidays’’ now heard ubiquitously in France.

In 2003, he complained that the town’s social center was serving almost exclusively Muslim youth, and hiring too many teachers of foreign ethnicity.

Friday June 24th, saw the opening of a freshwater bathing pool at the town’s Blondières recreation area, and days later a new controversy for the mayor, one which puts him at odds with the concept of ‘’le vivre-ensemble’’, the multicultural credo of modern France which translates to ‘’living together’’ or ‘’coexistence.’’

Article 4 of the new bathing facility’s rules, posted on the municipality’s website is a slap in the face for the politically correct, allowing only for traditional bathing costumes in the water; swimming trunks or briefs for men, one or two-piece swim suits for women.

The rule outlaws veils hiding part or all of the face. Ditto for monokinis and burkinis, bathing costumes which allow Muslim woman to cool off whilst observing religious tradition.

At least one organization has filed a complaint against the town, on the grounds of discrimination. Similarly, the spokesman for the Mohammed VI grand mosque, at nearby Saint-Etienne, has spoken out against the prohibition, claiming that the mayor needs a wake-up call.

‘’France is multicultural. To want to ban the veil in a recreational area affects the individual liberty of Muslims’’, charged the spokesman, adding that the rule would lead to stigmatization of the town’s growing Muslim population.

Last year, the hitherto largely unheard of ‘’burkini’’ made a splash when it was banned from some thirty French beaches, mainly along the country’s touristic Mediterranean coast. A case against one municipality, Villeneuve-Loubet near Cannes, taken by the French state, led to the invalidation of such bans in their entirety.

Commenting on the controversy surrounding last year’s Ramadan notice, Tardy expressed his duty to uphold the laws of the French Republic, stating that French law, and the tranquility of life in the town would be maintained under his watch.

Unacceptable and anti-social behavior could not be tolerated ; some locals were planning to leave the town if the situation continued to worsen, Tardy told France Bleu radio at the time.

‘’We are faced with a veritable problem of society’’, the mayor explained. ‘’If we don’t want it to end up like Bosnia here, we have to act, and to act quickly’’, referencing the cultural shift in Lorette and across France caused by decades of immigration.

Although his controversial bathing measure is likely to be struck down, it is unlikely to dent the 78-year-old mayor’s popularity. Voters in the town of Lorette have overwhelmingly elected Gérard Tardy, in every consecutive election since 1989.