Speaking at the Bálványos Summer University in Romania on Saturday, Hungarian Prime Minister Viktor Orbán outlined the threats faced by European nation states, and blamed an ‘’alliance’’ between EU bureaucrats and the ‘’empire’’ of Hungarian-born billionaire, George Soros, for orchestrating the migratory submersion of Europe.

“Western European Christians’’ would always be able to find security in Hungary under his leadership, he assured, claiming that his country’s role as a bulwark against the ‘’de-Christianization’’ of the continent would give next spring’s national elections an added European importance.

His resistance to the open borders agenda will ensure that he will also be contending with external forces in the election – unaccountable bureaucrats in Brussels and ‘’the Soros mafia network’’, he claimed, a reference to Soros’ Open Society Foundations and associated media.

Elements of Orbán’s Hungarian opposition are seeking to remove the border fence his government erected on the country’s southern frontier in 2015. Prior to the installation of the fence, hundreds of thousands of Middle Eastern migrants crossed into Europe along the so-called Western Balkans Migrant Route.

“As long as I remain the prime minister, the fence will stay in place. We will protect Hungary and Europe”, Orbán pledged during his address.

“A Soros plan exists,” the straight-talking leader charged, quoting from Soros’ proposals that the EU take in one million asylum-seekers per year, allocating migrants across all 28 EU countries and funding the plan to the tune of billions. With this plan essentially being implemented, a suction effect was being created, Orbán said, which would continue the flow of humanity towards Europe.

“We are the obstacle to the realization of the Soros plan’’, a rebellious Orbán challenged.

“In order for Europe to be able to live, it has to win back its sovereignty from the Soros Empire”, the panel and assembled crowd heard as Orbán advised that nation states have an obligation to protect European borders.

“Once this is done, migrants must be taken back outside the EU. It sounds strict, but those who came illegally, must be transported back”, Orbán explained – a proposal tantamount to heresy for the left. 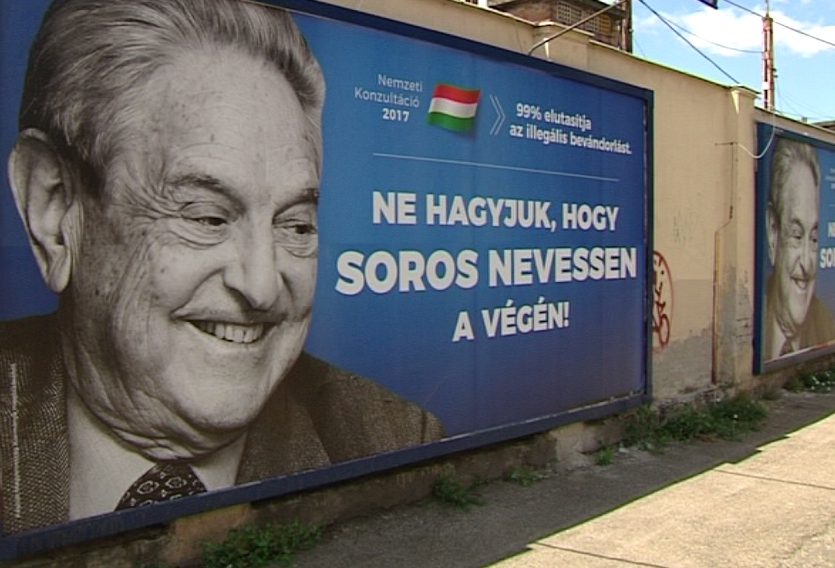 ”Don’t let Soros have the last laugh” billboards on display in Budapest this summer.

Unafraid of ruffling feathers, Orbán continued that a plan was being enacted for a demographic replacement of Europeans with ‘’a mixed-Muslim population’’ – words which will ensure his cult status among nationalists across Europe but which will win him few friends among the EU’s multiculturalist political class.

The Hungarian leader’s speeches at the Bálványos summer university have become an anticipated event, garnering no shortage of column inches at home and abroad.

During Saturday’s speech – to ethnic Hungarians living in Romania – the prime minister offered various solutions to Europe’s crises, including reforms of the EU, family-friendly policies to boost birthrates and political agreements with Russia and Turkey.

Referring to EU threats to sanction Warsaw over controversial judicial reforms, the outspoken prime minister re-affirmed his country’s support for its neighbor and Visegrad ally, stating that ‘’an inquisitional campaign against Poland will never be successful because Hungary stands in solidarity with Poland.’’