Missing is the flag of Vatican City, which Obama visited Thursday. 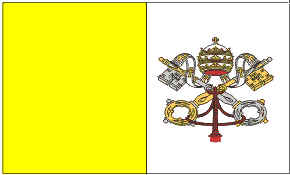