Democrat John Edwards was acquitted on one count of accepting illegal campaign donations today. A mistrial was declared on five other charges.
The trial exposed a sordid sex scandal that was completely ignored by the US media in 2008. 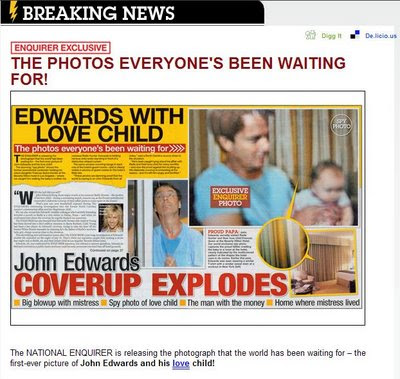 The US Democrat-media complex ignored Edwards’ affair until after the 2008 election even after the National Enquirer released pictures of John Edwards and his love child in 2008.

John Edwards said, “I did an awful lot that was wrong.”
WTOP reported:

John Edwards was acquitted on one count of accepting illegal campaign contributions and a mistrial was declared on five other counts when jurors said Thursday they couldn’t decide if he illegally used donor money to hide his pregnant mistress while he ran for president.

The monthlong trial exposed a sordid sex scandal that dashed Edwards’ White House aspirations in 2008, and the jury’s decision came on a confusing day.

The judge initially called jurors in to read a verdict on all six counts, before learning that they had only agreed to one. About an hour later, the jury sent the note to the judge saying it had exhausted its discussions.

It was not immediately clear whether prosecutors would retry Edwards on the other counts.

Edwards did not react when the verdict and mistrial were announced, but he was happy and smiling earlier when the jury said it had reached a verdict on one count after nine days of deliberations.

The trial recounted the most intimate details of Edwards’ affair with Hunter, including reference to a sex tape of the two together that was later destroyed. It also rehashed the elaborate cover-up that involved his most trusted aide, the aide’s wife, an elderly heiress and a wealthy Texas donor.

Edwards told reporters, “I don’t think God’s through with me.”