(This was originally posted in August 2009)
Poll watchers… 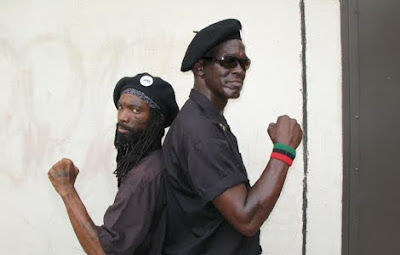 King Samir Shabazz (L) and Jerry Jackson (R), both of Philadelphia pose for their photo above. Jerry Jackson is a certified democratic poll worker.

One of the Black Panthers who intimidated voters on election day is a certified democratic poll watcher.
No wonder Eric Holder dropped the case.
John Fund reported at The Wall Street Journal:

When none of the defendants filed any response to the complaint or appeared in federal district court in Philadelphia to answer the suit, it appeared almost certain Justice would have prevailed by default. Instead, the department in May suddenly allowed the party and two of the three defendants to walk away. Against the third defendant, Minister King Samir Shabazz, it sought only an injunction barring him from displaying a weapon within 100 feet of a Philadelphia polling place for the next three years—action that’s already illegal under existing law.

There was outrage over the decision among Congressional Republicans, the U.S. Commission on Civil Rights, and in the Justice Department’s Civil Rights Division—especially after it was learned one of the defendants who walked was Jerry Jackson, a member of Philadelphia’s 14th Ward Democratic Committee and a credentialed poll watcher for the Democratic Party last Election Day.

In case you forgot…
Here’s the certified democratic poll watcher in action:

Also… He’s already been reinstated as a poll watcher.
And then there’s this… His main interests include “killing crakkkas.”
DANEgerus reported:

“Mr. Jackson’s MySpace page still lists one of his main ‘general interests’ as ‘Killing Crakkkas.’ Four days after the Justice Department dropped the complaint against Mr. Jackson, he again was named an official election poll watcher for the Democratic primary in Philadelphia’s municipal election. How convenient.”