Minnesota Governor Tim Pawlenty, Ralph Reed Jr. and David Keene the chairman of the National CPAC and American Conservative Union as well as second vice president for the National Rifle Association will speak at this year’s conference. 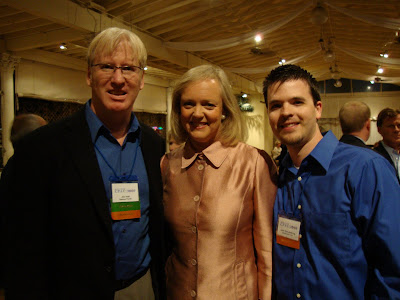 Meg Whitman joined me and John Schulenburg the founder of “Infidels are Cool” blog for a photo.

Governor Pawlenty was the keynote speaker tonight. Pawlenty was elected in blue state Minnesota despite his conservative record. Liberals try to convince people that their gifts are free. They’re not free. It’s very expensive. They have started to unravel the underpinnings that made this country great.

In Minnesota the average state increase was 19% each year for decades. The past two years Pawlenty was able to reduce the budget in Minnesota for the first time in history.

As for Obama, Pawlenty urged the president, “As far as ‘Cash for Clunkers’ …If we don’t have the money then quit spending it… Allowing democrats to control your money is like having Michael Vick watch your dog for the weekend.”

The government can’t run the programs that they control right now so why would we want to give them another one?

Minnesota has the highest penetration of health savings accounts in the nation, around 9%. In Minnesota bus drivers could get lifetime medical benefits if they worked 15 years. Tim put the spotlight on this issue and turned it around. Today the new bus drivers in the state won’t get this same perk after only fifteen years on the job. The bus driver’s union folded because they couldn’t stand the public scrutiny that was going on.

Ralph Reed, the gentleman from Georgia, spoke next.
As we go into next year and one of the biggest wins that we will see as a movement we have to understand how we got here. Don’t be fooled about the blue dogs. The democratic leadership will be breaking arms to get their bills passed. We lost a presidential election in 2008 that was an embarrassment. We were out hustled on the ground. Barack Obama had 6 million volunteers. He had three times as many field offices as McCain. In Virginia he carried the state with 93 full time employees from the day he was nominated. The Republicans had only 23.

Barack Obama has woken conservatives up from their coma. We are already ahead of where we were one month before the 1994 election. This administration in a short period of time is taking us toward slavery faster than any other liberal administration in history. Hugo Chavez even said, “Comrade Obama. If Fidel and I are not careful we’re going to end up on your right.”

Today the federal government is guaranteeing 90% of all housing loans in the US. The president gave 20% Of GM to his union supporters. Now they want to take over the energy and health care segments of our country.

Health care defeat is not an option. If we let this thing pass we may never be able to repeal it. Nancy Pelosi needs the public plan. The Baucus Plan won’t pass. Even though they called us Nazis for showing up and protesting we will not be silent. We are not going away until this plan is stopped. We have to get involved now.

Three Keys to Winning Back the Majority.
1- Return to the principles of Faith and Freedom. We need people who can articulate this.
2- We need candidates who can stand on those principles and run on those principles. We need women and Hispanics to know that they are welcome and valued in this movement and we need to run hundreds of these candidates.
3- We need to build a massive grassroots movement second to none. Reed has started the Faith and Freedom Network. We’re on offense and not just defense. The days we came to California and wrote it off are over. Run on who you are and what you believe.

As Ronald Reagan once said, “Our people look for a cause to believe in. It is time the GOP was painted not in “pale pastels” but in “bold colors.”