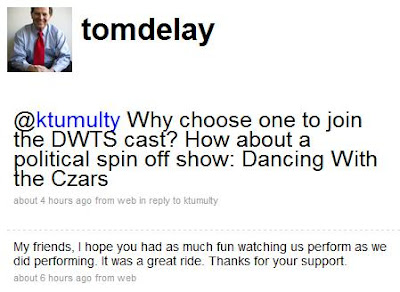 Poor Tom Delay was forced to withdraw from Dancing with the Stars yesterday after sufferining stress fractures in both feet.
But, his enthusiasm remains.
The Hill reported:

After leaving ABC’s “Dancing with the Stars” yesterday due to stress fractures in both of his feet, DeLay jokes with Time’s Karen Tumulty on Twitter that a network should create “Dacing with the Czars” as a “political spin off show:

@tomdelay You’re a trailblazer! Which political figure do you think should be next to try #DWTS?

@ktumulty Why choose one to join the DWTS cast? How about a political spin off show: Dancing With the Czars

Or, you could just call it “Dancing with the Commies.”