“How to kill a Great Nation and Its Military in 9 Easy Months,”
By Barack Hussein Obama.
As Told By Bill Ayers

Chapter I: Crushing an Economy

Chapter II: Standing With Dictators While Democracy Protesters Die in the Street 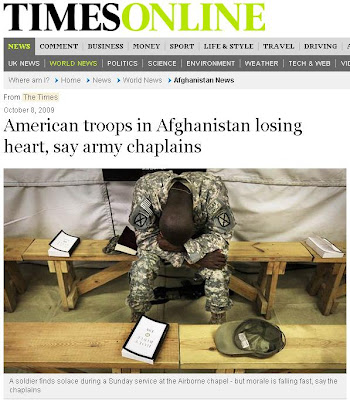 American soldiers serving in Afghanistan are depressed and deeply disillusioned, according to the chaplains of two US battalions that have spent nine months on the front line in the war against the Taleban.

Many feel that they are risking their lives — and that colleagues have died — for a futile mission and an Afghan population that does nothing to help them, the chaplains told The Times in their makeshift chapel on this fortress-like base in a dusty, brown valley southwest of Kabul.

“The many soldiers who come to see us have a sense of futility and anger about being here. They are really in a state of depression and despair and just want to get back to their families,” said Captain Jeff Masengale, of the 10th Mountain Division’s 2-87 Infantry Battalion.

“They feel they are risking their lives for progress that’s hard to discern,” said Captain Sam Rico, of the Division’s 4-25 Field Artillery Battalion. “They are tired, strained, confused and just want to get through.” The chaplains said that they were speaking out because the men could not.

UPDATE: Via HotAir– Michael Yon links to an intriguing report from Anthony Lloyd from Afghanistan. Don’t forget to hit Michael’s tip jar. We’re going to need him on the ground more than ever.