Gee, what a shocker. Obama nominated another complete nutbag for a high level government position.

President Obama’s nominee to become commissioner for the Equal Employment Opportunity Commission signed a manifesto praising polygamy and arguing traditional marriage should not be privileged above other forms of union.

Chai Feldblum, an outspoken homosexual rights activist and Georgetown University law professor, is a signatory to an online petition entitled “Beyond Same-Sex Marriage: A New Strategic Vision For All Our Families and Relationships.”

The organization defines itself as “a diverse group of nearly twenty LGBT and queer activists [who] came together to discuss marriage and family politics as they exist in the United States today.”

The manifesto, first noticed by the Catholic News Agency, calls for a “new vision” for securing governmental and private institutional recognition of “diverse kinds of partnerships.”

Among the stated “partnerships” the petition seeks to protect is “households in which there is more than one conjugal partner.”

The petition laments what it claims are conservative attempts to push for “abstinence-only sex education, stringent divorce laws, coercive marriage promotion policies directed toward women on welfare, and attacks on reproductive freedom.”

Feldblum is one of the many rightwing haters who signed this nutty manifesto: 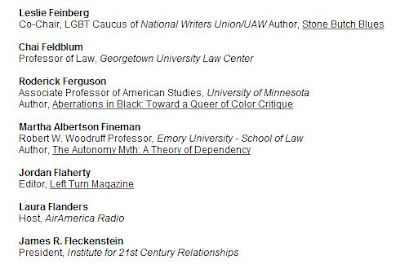