You know it’s a bad day when you get your a$$ kicked by a drag queen.

Bummer. Two thugs get knocked out after starting a street fight with the wrong drag queens:

From the video: Two yobs have appeared in court after starting a fight with Spiderman — and getting knocked out by two cross-dressers.

But they picked the wrong victims on this occasion after being floored by two cross-dressers who are believed to have been cage fighters on a night out.

Police confronted Gardner and Fender, both of Llanerch Road, Bonymaen, nursing their injuries after identifying the unemployed pair from CCTV pictures which showed them fighting with people queuing outside the Escape club.

The Daily Mail has more on the incident:

Two thugs who attacked what they thought were a pair of transvestites picked on the wrong men – when their intended victims turned out to be cage fighters on a night out in fancy dress.

Dean Gardener, 19, and Jason Fender, 22, singled out the two men walking along a street in wigs, short skirts and high heels.

Bare-chested Gardener was caught on CCTV confronting one of the men in a pink wig, black skirt and boob tube – then seen swinging a punch, a court heard.

But the other cage fighter, wearing a sparkling black dress and matching long wig, sprang to his friend’s help, delivering two lightning-quick punches to the two stunned yobs.

The cage fighters were then seen teetering away in their high heels, stopping only to pick up a clutch bag they dropped during the melee.

Gardener and Fender were left dazed and seen staggering to their feet after their failed attack. 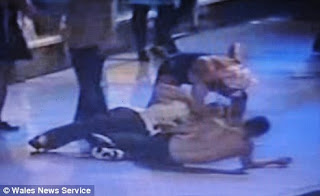 Knockout: One of the cross dressers casually feels for his clutch bag before walking away. (Daily Mail)