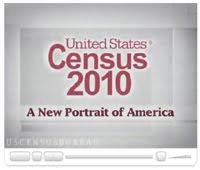 Is anyone surprised by this?
The Obama Administration and Census Bureau will not be asking persons for proof of citizenship for the 2010 census.
They say it would be “too expensive” and would “scuttle any chance that the census could be done on time.”
NOLA.com reported:

The Commerce Department and Census Bureau declared Tuesday that an amendment by Sen. David Vitter, R-La., to require the 2010 census to ask all persons their citizenship and immigration status would scuttle any chance that the census could be done on time and would cost taxpayers hundreds of millions of dollars.

U.S. Sen. David Vitter portrays his amendment as an attempt to keep Louisiana from losing one of its seven congressional districts in the coming reapportionment.The warning came even as the Senate Democratic leadership sought to head off a vote on the Vitter amendment to the Commerce, Justice, Science Appropriations bill. An effort by the leadership to invoke cloture failed Tuesday evening, with the fight over whether to vote on the Vitter amendment, which he co-sponsored with Sen. Robert Bennett, R-Utah, expected to resume today.

Vitter portrays his amendment as a last-ditch effort to protect the political power of Louisiana and other states with relatively small populations of people who are either not citizens or are not legal residents in the United States, and keep Louisiana from losing one of its seven congressional districts in the coming reapportionment.

The decennial census, required by the Constitution to count all “persons,” is used for the purposes of congressional apportionment and legislative redistricting. The result is that places with more people — regardless of their status — get more representation.

Or as Vitter put it in floor debate on his amendment last week, “States that have large populations of illegals would be rewarded for that. Other states, including my home state of Louisiana, would be penalized.”

Vitter said that in addition to Louisiana, the states of Indiana, Iowa, Michigan, Mississippi, North Carolina, Oregon, Pennsylvania and South Carolina “would lose out.” He challenged the senators from those states, “if you vote against this amendment, then you are voting against the interests of your state.”

By far the biggest winner under the existing system is California, followed by Texas, New York and Florida.

But opponents of the measure described it as ill-advised, and in its intent, both unconstitutional and discriminatory.

The Census Bureau, and the Commerce Department of which it is a part, said that 425 million of the 600 million census forms already had been printed, and that even adding an addenda sheet with the Vitter question also would require rewriting software code, reprogramming scanners and retraining census workers to the tune of hundreds of millions of dollars.

Of course, this story will be buried by the state-run media.