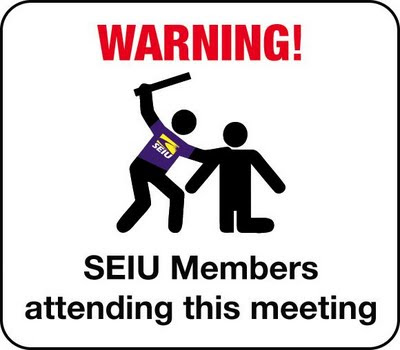 The SEIU members beat and kicked Ken Gladney in the parking lot.

Could you even imagine if this would have happened to a black Obama supporter? It would have been all over the state-run media.
At the same event a woman was smashed in the face by an SEIU member.

Now, more than 85 days after the attack no charges have been filed against the SEIU thugs.
But, the media is painting victim Ken Gladney as an idiot shlub for trying to make a few bucks selling flags in the parking lot.
Blog Prof has the latest on the public beating of Ken Gladney.

UPDATE: The Soros-funded Media Matters is mocking conservative Andrew Breitbart and insists that attack on Ken Gladney as a fabricated stunt to make a few bucks.

Does Andrew Breitbart know something the St. Louis Police Dept. does not?

I ask because over the weekend blogger and WashTimes columnist Andrew Breitbart was back hyping the tall tale of Kenneth Gladney, the conservative African-American activist who was reportedly “beaten” by “union thugs” outside of town hall forum hosted in St. Louis in August. At the time, the right-wing noise machine went bonkers over the dubious Gladney tale, claiming it showcased how vicious and violent unions really are. And Breitbart himself published an unintentionally hilarious column headlined “I Am Kenneth Gladney,” in which Breitbart immortalized Gladney’s “horrifying” tale, and also lied by claiming the White House had “directed” “union thugs” to rough up anti-health care protesters.

The problem for Breitbart and company (and yes, this is a chronic problem for Brietbart), is that the facts didn’t stand up, and the lavish tale of the Gladney “beating” quickly collapsed. (Bloggers were sure he had been rushed to the hospital clinging to his life. Not true. Not even close.) Even a former St. Louis pal of Gladney’s suspects the incident was seized upon by Gladney’s lawyer/agent as a way to make a quick buck. (Was it Gladney’s attorney who told him, days after the incident, to show up a right-wing rally in a wheelchair even though Gladney had no discernible injuries?)

Yet there was Breitbart over this last weekend tweeting about the vicious Gladney “hate crime,” which is interesting because the Gladney episode (i.e. the savage “beating”) was captured on video, and the St. Louis police know who the suspected culprits are. Yet here we are nearly ten weeks after the alleged beat-down, which according to right-wing blogs left Gladney blooded (fact: it did not), and nobody in connection with the “hate crime” has been formerly charged.

This story ain’t over yet.
Not by a long shot. Stay tuned.