More safe practices…
Obama’s Safe Schools Czar Kevin Jennings wrote that killing someone who called you a name was not aberrant behavior. 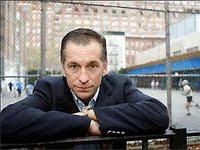 How’s that for being safe?

We need to own up to the fact that our culture teaches boys that being “a man” is the most important thing in life, even if you have to kill someone to prove it. Killing someone who calls you a faggot is not aberrant behavior but merely the most extreme expression of a belief that is beaten (sometimes literally) into boys at an early age in this country: Be a man – don’t be a faggot.

As Suzanne Pharr so eloquently explained in her landmark work Homophobia: A Weapon of Sexism, antigay bigotry is inextricably intertwined with the maintenance of “proper” gender roles by which little girls are supposed to be “sugar and spice and everything nice” and boys are supposed to be, well, quite the opposite. When boys take up guns to kill those who torment them with words like “faggot,” we shouldn’t be surprised. They’re just doing what we have taught them to do.