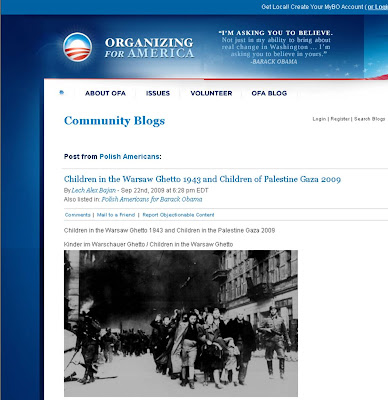 After posting yesterday on the disgusting anti-Semitic hate speech on Barack Obama’s website I received this from Rachel P.

I was looking at your article, Obama’s Website Carries Blogpost That Equates Israel to Nazi Germany. I tried linking through Israpundit directly to the Obama site and I received this Error, “Invalid page requested.” I tried looking through internet archiving sites and they all say that site does not allow you to search their database. I also tried searching through Obama’s website directly (as much as I did not want to) but every time I was taken to the login screen and that I won’t do! After some searching through Google I queried “Lech Bajan Richard Falk” and immediately Obama’s website came up and even in the brief description it has “Polish Americans for Barack Obama. Nazi Israel … Indeed” So obviously the article was there and then removed. When I click on the link it brings up the full profile of Lech Bajan (Founder RAQport) Polish American for Barack Obama and his history of articles but not that one. He has multiple anti-Semitic articles that have not been taken off Obama’s blogspot and this is the link. There really are some awful things on here some recently as July.

Sure enough.
The Obama website blog is filled with anti-Semitic filth:
“Religious Fundamentalism in Israel” 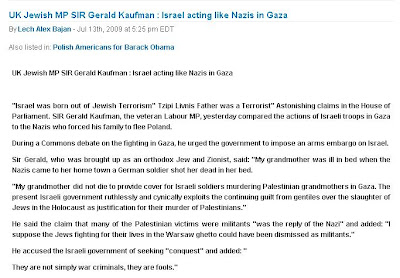