VILE, SICK & TWISTED…
The state-run media and leftist blogs continued their smear campaign against Rush Limbaugh tonight. These media hacks have smeared Rush with quotes he’s never made to make him out to be a racist. 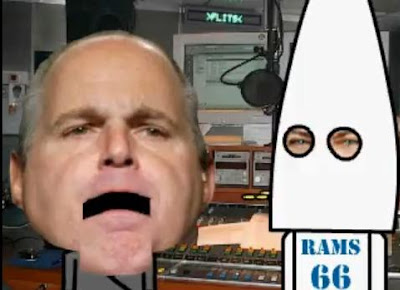 The Huffington Post calls this the new Rams football uniform…
Funny, they never did this to Robert Byrd, the democratic Ku Klux Klan kleagle of the senate?

The Huffington Post tonight posted a video of Rush Limbaugh and the Klan:

This is a new low for the democrat-media complex.
Let’s hope and pray these thugs don’t get away with this.

HotAirPundit has more on this latest attack.

This week the state-run media ran controversial statements attributed to Rush Limbaugh. But, Rush Limbaugh never made the statements. They were lies made up by the far left and communist Rush-haters.
But, the left is hoping that if they repeat these lies enough they will be able to destroy the popular conservative commentator.