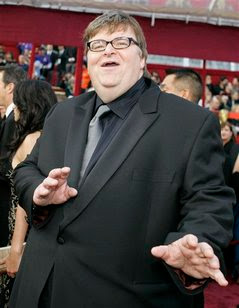 After all of the state-run media publicity, Michael Moore’s latest capitalism-bash tanked at the box office this weekend.
Big Hollywood reported this from Steve Mason:

The biggest disappointment of the weekend is Michael Moore’s Capitalism: A Love Story (Overture). After a $57K per theatre average on 4 screens last weekend, the picture broke to a wider 962 locations with terrible results. The “documentary” only sold an estimated $1.3M in tickets to start the weekend, and it will finish at about $3.9M for a PTA of less than $4,000. That soft opening will almost certainly make Capitalism Moore’s weakest-grossing movie since 2002’s Bowling for Columbine ($21.5M domestic gross).