Local sports talk radio hosts at St. Louis 590 AM KFNS were confronted in person after they smeared Rush Limbaugh on Monday. The show’s host, Jeff Gordon, who also writes for the St. Louis Post Dispatch, doesn’t like Rush too much and said that Rush “incites violence on a daily basis.”

Local blogger Sharp Elbows went to the bar where they were broadcasting to confront the radio hosts.
Click Photo for Video 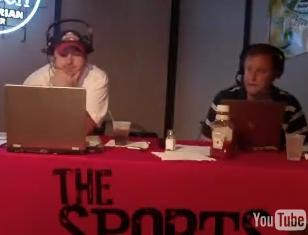 Rush threatened to take action today against liberal media smear merchants like these two at KFNS. As reported earlier the smears were made up by far left and communist Rush-haters.