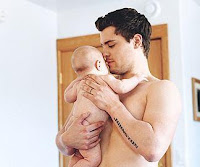 The 19 year-old father of Sarah Palin’s grandchild will pose nude for Playgirl.
The AP reported:

Levi Johnston is going for the ultimate exposure—his bare body.

Posing nude for Playgirl is next for the 19-year-old father of Sarah Palin’s grandchild. Johnston’s attorney, Rex Butler, said Wednesday that a formal agreement has not been reached with the online magazine but adds it’s a “foregone conclusion” it will happen.