We already knew that Barack Obama’s brother Malik was a Luo activist and a militant Muslim who argued that the black man must “liberate himself from the poisoning influences of European culture.” 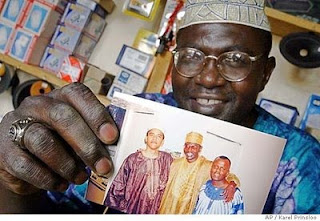 Now there’s this:
Audio found (Here) of speaker in Kenya on the election of Kenyan (Obama) being elected in the US as President. Starting around the 2:00 minute marker, the speaker discusses ethnicity problems towards the Luo tribe in Kenya. Then quotes Senator Obama as saying that “The prospect that the US would elect a Luo president before Kenya does.”

The file is from:
Olara Otunnu (Harvard Law, 1978) relating the remark of Kenyan historian Ali Mazrui on the oddity that a member of Kenya’s Luo tribe (Barack Obama, a Kenyan citizen and Luo tribe member from birth) may become president of the United States before a Luo tribe member becomes president of Kenya. “Town Hall Forum: An Examination of Race, Age, Gender & Religion in the 2008 Election,” Harvard Law School Reunions, Oct. 25, 2008, 9:15 a.m. (Austin Hall, 1st Floor, West), at 60:17 mark.