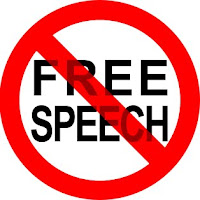 St. Louis University has banned author, founder of FrontPageMag.com, and terrorism expert David Horowitz from speaking on campus this coming week. The anti-free speech university is concerned that his speech on Islamo-fascism may upset students at the campus.
The St. Louis Post Dispatch reported:

Conservative activist David Horowitz will not be speaking at St. Louis University this month after school officials raised objections about the title and content of his speech, “Islamo-Fascism Awareness and Civil Rights.”

The SLU College Republicans, a student group, had invited Horowitz to speak on campus. The event would have been paid for out of student activity fees.

SLU said in a statement that it did not “ban” Horowitz from campus. Rather, the school was concerned that the event could be viewed as “attacking another faith and seeking to cause derision on campus.”

Horowitz, reached by phone on Friday, called the university’s decision “outrageous.” He said his speech is about what he sees as a campaign against Jews and the state of Israel on many college campuses.

“I have spoken at 400 universities,” he said. “This is the first time my speech has been censored and stopped by an administration. And they are supposed to be the guardians of intellectual discourse.”

The school’s action also prompted a sharp rebuke from Cary Nelson, the president of the American Association of University Professors, which found itself in the unusual position of defending Horowitz. The AAUP often does not see eye-to-eye with Horowitz, who criticizes college campuses for their women’s studies departments and for allegedly stifling conservative opinions.

Nelson said in a statement that in canceling Horowitz’s speech, SLU “joins the small group of campuses that are universities in name only.”

Local radio host Jamie Allman hopes to speak with David on Monday about his ban from SLU.

More… But the Catholic Campus did recently allow a Hamas supporter to speak on campus.