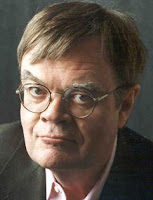 Liberal media icon Garrison Keillor says the country should kill all Republicans to pay for health care in the United States.
The Chicago Tribune published Keillor’s wish, via Don Surber:

When an entire major party has excused itself from meaningful debate and a thoughtful U.S. senator like Orrin Hatch no longer finds it important to make sense and an up-and-comer like Minnesota Gov. Tim Pawlenty attacks the president for giving a speech telling schoolchildren to work hard in school and get good grades, one starts to wonder if the country wouldn’t be better off without them and if Republicans should be cut out of the health-care system entirely and simply provided with aspirin and hand sanitizer. Thirty-two percent of the population identifies with the GOP, and if we cut off health care to them, we could probably pay off the deficit in short order.

“With this gang in charge who would be surprised to find that under ObamaCare your chances of a liver transplant really will depend on your politics? Not me.”

Related… 59% of Americans prefer passing a series of smaller reforms that address specific problems rather than nationalizing the system as democrats are proposing.