This photo was taken by Code Pink during their trip to Afghanistan. 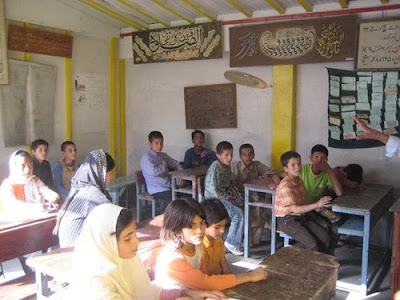 For some reason the Code Pink Marxists did not thank George Bush for the fact that little girls were once again attending school in the former Taliban stronghold.

Hell freezes over.
Code Pink is rethinking their call for US troop pullout in Afghanistan.
Kristinn reported this from The Christian Science Monitor:

During their weeklong visit here, in which they met with government officials, politicians, ministers, women activists, and civil society groups, the small team of Code Pink members had hoped to gather evidence to bolster their call for US troop withdrawal within two years, and capitalize on growing anxiety back home about the war.

While the group hasn’t dropped its call for a pullout, the visit convinced them that setting a deadline isn’t in Afghanistan’s interests, say Ms. Benjamin and fellow cofounder Jodie Evans.

“We would leave with the same parameters of an exit strategy but we might perhaps be more flexible about a timeline,” says Benjamin. “That’s where we have opened ourselves, being here, to some other possibilities. We have been feeling a sense of fear of the people of the return of the Taliban. So many people are saying that, ‘If the US troops left the country, would collapse. We’d go into civil war.’ A palpable sense of fear that is making us start to reconsider that.”

So does this mean that Code Pink is now to the right of the Obama Administration?