The massive tax will cost American households around $1,761 a year. The Department of Energy estimated GDP losses would be between $444 billion and $1.308 trillion over the 21-year period. Cap and trade also could cost the US 4 million jobs.

Meanwhile… The World Climate Report revealed this week that the ice melt during the Antarctic summer of 2008-2009 was the lowest ever recorded in the satellite history. 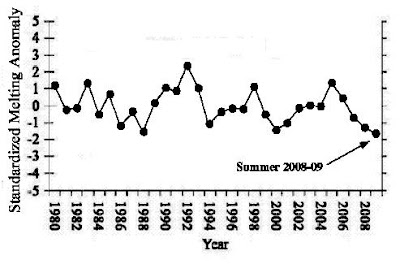 A 30-year minimum Antarctic snowmelt record occurred during austral summer 2008–2009 according to spaceborne microwave observations for 1980–2009.