So much for those new relations with Syria.
The Obama Administration restored the ambassador to Syria this year after a four year absence marking an acceleration of Washington’s engagement with the brutal regime.
…Guess it didn’t work out so well. 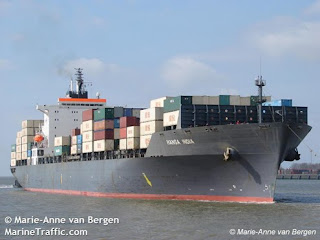 US troops boarded a German-owned freighter in early October and found eight containers full of ammunition, allegedly headed to Syria from Iran. The shipment is in violation of a UN weapons embargo and has become a source of chagrin in Berlin.

An “embarrassing affair,” is how one German diplomat described it. The official could also have added: potentially damaging to trans-Atlantic relations.

In an operation reported on by SPIEGEL over the weekend, US soldiers entered the freighter Hansa India in the Gulf of Suez at the beginning of October and discovered seven containers full of 7.62 millimeter ammunition suitable for Kalashnikov rifles. An eighth container was full of cartridges suitable for the manufacture of additional rounds. The incident is particularly awkward for Berlin as the Hansa India is registered to the Hamburg-based shipping company Leonhardt & Blumberg.

Investigators suspect that the arms were part of an Iranian shipment bound for either the Syrian army or for Hezbollah, the militant Islamist group. US officials have pointed out that the delivery is in violation of United Nations Security Council Resolution 1747, which prohibits arms shipments either into or out of Iran.

Cuffy Meigs has more on the “embarrassing affair.”