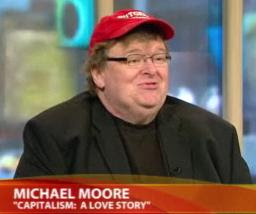 Figures. Democratic leaders were lining up in DC last night to see the premeire of Michael Moore’s latest communist propaganda film. Democrat Alan Grayson was able to attend the event after comparing Republicans to nazis for not supporting nationalized health care.
The Politico reported:

Prior to his film’s screening at the AFI Theatre in Silver Spring Monday night, Moore sat down with POLITICO. He told us, “I’ve had more requests from members of Congress to get a copy of the film. … If millions of people in this country go to see this movie, [Congress] wants to know what [the public’s] really looking at, especially if it affects them.”

Unlike the footage of politicians running from him in “Fahrenheit 9/11,” members, including Cummings, Kaptur and Rep. Baron Hill (D-Ind.), talked with Moore about the pressure they were under to pass the bailout.

Moore, who openly expressed he “loves” President Obama and is “filled with a lot of optimism,” said his agent, Ari Emanuel (brother to White House Chief of Staff Rahm Emanuel), called him while shooting to say that the filmmaker may get his first White House screening.

Michael Moore also attacked Republicans for “being interested in capitalism” earlier this week.

Related… Anti-capitalist millionaire Michael Moore says, “Capitalism did nothing for me.”