Bomb-thrower Grayson Stacks Townhall–
Coward Alan Grayson stacked his townhall last night with supporters.
Grayson has been attacking Republicans relentlessly the past week and claimed that the nation’s health care crisis was like the Holocaust. 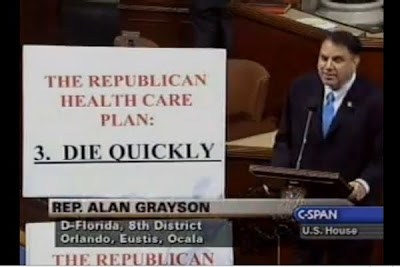 But, Grayson wasn’t brave enough to face his constituents face to face so he stacked his meeting last night.
WDBO reported:

Grayson received some flack for again holding a town hall in a small venue, but he told reporters he didn’t choose the location.

“The county actually suggested this venue, as did the police,” he said.

With a crowd about 75 percent for to 25 against, it was a stacked deck. But he still took questions from all sides – like this man who wanted to know why Democrats are ignoring GOP suggestions.

“There are actually 13 of them that the Republicans have offered.”

Over 100 people gathered outside the town hall meeting where they waived homemade signs and chanted “read the bill” and “Grayson lies.”

“I tried to get in,” he said. “I called [Grayson’s] office the day after the email went out and I couldn’t get in.”

Some people who left the town hall after getting frustrated told the protesters what was going on inside – that the crowd was stacked with Grayson supporters.

WFTV has video of the protesters.

Grayson was confronted during the townhall anyway:

Alan Grayson Gets Confronted At Town Hall Meeting
by speakmymind01