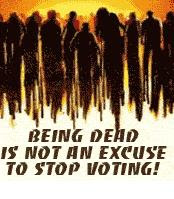 Reynolds Smith Jr. was a stalwart Democratic voter in stark-red Alabama. But the Alabama Democratic Party overlooked another fact when it appointed Smith to an interim party panel: He died in November at age 83.

Party executive director Jim Spearman told the Press-Register Tuesday that the mistake was caused by outdated records. He said the party received Smith’s name from a 2006 list of candidates for the county committee and then used a voter list to verify him as an active voter.