Congratulations to the staff of The Wall Street Journal!
Despite the national trend, the WSJ continues to gain circulation. 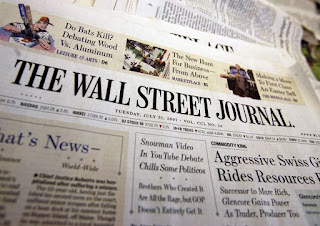 Americans don’t like being lied to. Reporting the truth without the liberal spin has paid off for the Journal.

As the state-run media continues to lose viewers and readers due to their biased and inaccurate reporting the Wall Street Journal is now the top-cirulating newspaper in the United States.
The Politico reported:

Rupert Murdoch may have always wanted—still wants?—to own the New York Times, but the press baron can now boast of owning the top-circulating U.S. paper: The Wall Street Journal.

Staffers in New York were sent a memo today with the subject, “A Toast to our Success – Today at the Hub @ 5:00 pm.”

No word on whether Murdoch will be in attendance, as staffers in the paper’s headquarters celebrate not only taking the number one spot, but continuing to see circulation growth—a rarity in the newspaper industry.

Six months ago, the Journal was the only Top 25 daily to gain in circulation, edging closer to USA Today. When the latest round of numbers from the Audit Bureau of Circulations are released next week, the Journal will come out on top, according to Editor & Publisher.

While the Journal’s circulation rose to 2.02 million copies over the past six months, USA Today dropped 17 percent, down to 1.88 million.

I’ve been reading the WSJ online version for years now.. and I’d say
they’re more balanced than any of the major newspapers.. but
wouldn’t say it’s strictly conservative.