This news would probably shock Obama, too. 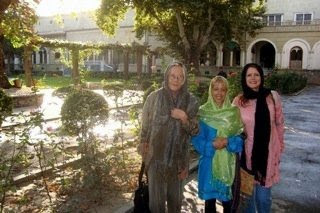 Since they failed in Iraq, the founders of Code Pink are leading a surrender mission in Afghanistan. left to right- Ann Wright, Medea Benjamin and Jodie Evans. (Pink Tank)

The Marxist founders of Code Pink were surprised this week to find that Afghans want the US to stay and finish the job.
Kristinn at Free Republic reported this on Code Pink’s trip to Afghanistan:

Our meetings have covered all kinds of topics, from military strategy to women’s rights to opium policy. We’ve learned about the need to not only train Afghan soldiers and police, but pay them a living wage (their $200 salaries can’t cover the basics for a family). We discussed the pros and cons of U.S. troops, and to our surprise, found very few people who would like the troops out now. Most say that the country would collapse into civil war or be taken over by the Taliban if the US troops were to leave. But that doesn’t mean they want MORE troops. In fact, most want to see a phased out withdrawal of foreign troops, accompanied by a reconciliation process. We’ve had endless talks about what that process should look like, and who should be at the table (including women so their rights don’t get further compromised!!!).

Sadly, the Afghans might as well have been talking to a wall.
The radical Code Pinkos could care less about the plight of Afghan women if the US surrenders and turns the country back over to warlords and the Taliban.

UPDATE: Do you suppose there’s any chance they’ll run into this guy while they are there?