Kevin Aylward at Wizbang discovered what the state-run media won’t tell you.
The Baucus Fantasy Plan gets a clean CBO scorecard by raising your taxes: 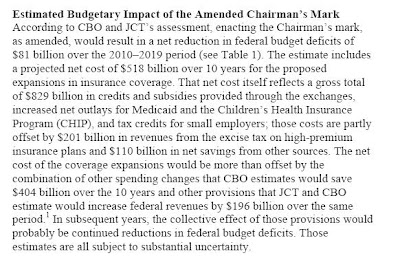 The suggestion by the CBO that the dem’s health care plan would save billions is pure fantasy as we all know the federal government does not exactly have a record of operating under budget…
Just look at social security that could possibly default within 2 years.
Kevin Aylward added:

Ignore for a moment the net cost of $829 billion, instead focus on how the the plan (despite what nearly every media outlet is reporting, it’s not a bill) achieves its reduction in the federal deficit. The numbers are right there…

** $201 billion in revenues from the excise tax – Tax hike for those currently insured
**$110 billion in net savings from other sources – Perhaps these “savings” won’t be passed along to you in the form of increased fees…
**spending changes that CBO estimates would save $404 billion – Medicare cuts, caps, and reimbursement changes, the costs of which will ultimately be borne by Medicare recipients
And my favorite, the footnote…

The Baucus Obamacare Plan would also raise money by fining those who do not purchase the plan… Or jailing them.

$829 billion over the next decade to insure fewer than 10 percent of the population?
It’s a solution only a big spending liberal could love.