This comes on the same day that the BBC admitted that Earth reached its peak temperature ten years ago.

ABC propagandists are pushing the theory that Al-Qaeda and the Taliban are helped by manmade global warming.
Click Photo for the Video 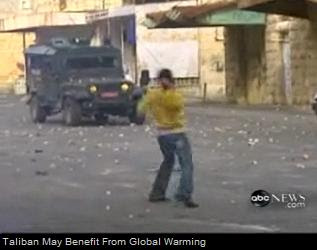 Which doesn’t quite explain why they are showing video of Palestinian children throwing rocks at Jewish soldiers.

A number of U.S. intelligence and military studies recently made public describe how man-made climate change plays into the hands of terrorist groups in many countries…

Agriculture in [Afghanistan] is struggling, leaving many young men with no money or work…

“There are a lot more people… who are unemployed with nothing to do, and so the Taliban basically seems an attractive thing for them to join,” says [some journalist/government employee]…

ABC just successfully perpetrated two myths in one biased report. The first being that manmade global warming exists. The second being that poor farmers only turn to Al-Qaeda and the Taliban because they are starving. They like to ignore the hundreds of stories of well educated and middle class jihadists who decided to commit acts of terror.

As Shrugtastic says, “It’s no wonder FOX News’ ratings are through the roof.”