Hah-Hah-Hah
The White House issued a clarification today admitting that Joe Wilson was right—
Team Obama is now for the first time backing a provision that would require immigrants to provide proof of citizenship. This is a provision that democrats have previously voted down in committee at least two times. 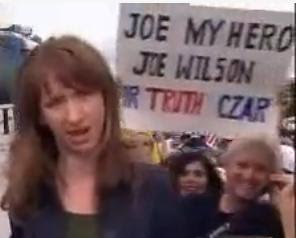 This comes from MSNBC, the official voice of the radical Obama White House:

The White House tonight is providing the below clarification on what the president’s health-care proposals would mean when it comes to the issue of illegal immigrants.

The question, as we all know, arises from the Wilson “You lie” outburst, and the core claim that notwithstanding specific bill language barring illegal immigrants from participating in the “exchange,” as a practical matter, there is no way of verifying the citizenship of applicants — which is the current state of play. Republicans say that then means illegal immigrants would end up being enrolled in plans — bill language or no bill language.

Today, for the first time as far as we know, the administration is backing a provision that would require proof of citizenship before someone could enroll in a plan selected on the exchange.

Here, the administration also concedes that hospitals would be compensated with public funds for the care of undocumented immigrants.