Here is Barack Obama’s communist Green Czar giving an interview in 2008 at the Ella Baker Center for Human Rights. The title of the talk was “Green Jobs – Not Jails” 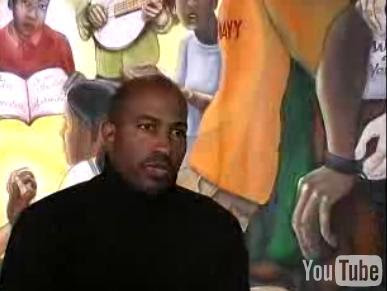 Here is a closer look at the mural at the Ella Baker Center For Human Rights: 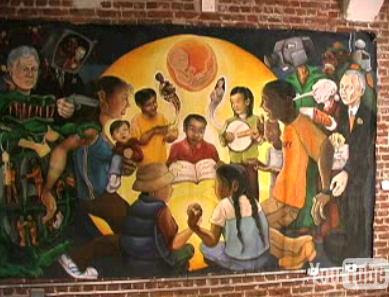 Take a closer look at the mural and you’ll be bowled over. The painting has mages of African-American and Latinos in the center, with a white cop shooting a Latino woman with her baby on one side, and a white guy in a suit on the other side with a sign that says “war on youth” holding an African American kid in chains.
More Leftist hate… And, this was a human rights group?

Barack Obama’s communist Green Czar, Van Jones, endorsed an anti-police day of action initiated by a Maoist communist cult group in 2006.
Via One Middle American and kristinn at Free Republic:

Van Jones, the controversial Green Jobs Czar in the Obama administration endorsed an anti-police day of action initiated by a Maoist communist cult group, the Revolutionary Communist Party, in 2006.

The statement for the action is entitled, “Call for Oct. 22, 2006: Eleventh Annual National Day of Protest to Stop Police Brutality, Repression and the Criminalization of a Generation”, and states in part:

Why isn’t the escalation of police brutality and murder in recent years headline news? Perhaps because these images don’t comply well with the need to project images of police as “defenders against terrorism.” Since September 11, 2001, law enforcement agents (including border patrols) have been given greater license to increase and broaden repression. Steps were even taken to grant more worth to a police officer’s life, with the “heroes law” enacted in New York State, for which the governor originally called for a death sentence for anyone who shoots a cop. At the same time, the cop who killed African immigrant Ousmane Zongo in New York, after a rare conviction (criminally negligent homicide) was sentenced with probation and community service. Torture, brutality, detentions, domestic spying, profiling, and other attacks on human and civil liberties have been made part of the routine of daily life that we are asked to accept without question. At airports, subways, transportation centers, and more we are asked to “welcome” bag searches, check points, invasion of privacy, stripping away of civil liberties, all in the name of “national security.”

Jones’ name on the list of endorsers is between to radical anti-Israel groups:

Other endorsers are communist groups like Code Pink, ANSWER, the Party for Socialism and Liberation, an SEIU local as well as various anti-American leftists including terrorist supporter attorney Lynne Stewart.

UPDATE: Boy, someone needs to send this to far left crank Joe Klein.