Hundreds of US doctors and their supporters marched on Washington yesterday to protest against the Democratic plan to nationalize health care.
Looking at the Left covered the rally against Obamacare. 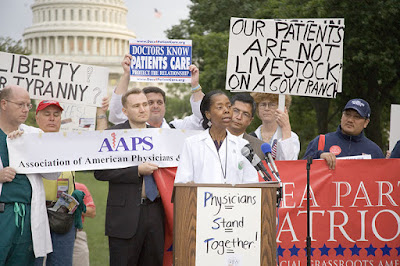 “We are not the enemy,” said Dr. Joyce Lovitt, a pediatrician from Georgia.

Here’s video of the doctor’s protest from ABC 7:

Doctors rallied in protest of the president’s plan for health care takeover Thursday night, less than 24 hours after he laid out his plan. Not a surprise– This protest received little coverage from the state-run news.