He was on the clock. 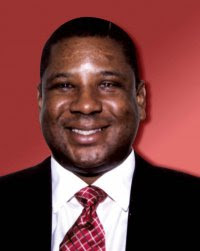 You may recognize Elston McGowan. He is the Public Service Director of SEIU Local 2000 and a local Baptist minister.

He is also one of the SEIU thugs who beat Kenneth Gladney after the Russ Carnahan town hall meeting in St. Louis last month. McGowan said Gladney, who is half his size, actually attacked him. He claims he was the victim even those he was hauled to jail for the attack.

** 24th State is reporting tonight that Elston McGowan is asking the SEIU for workman’s comp for the injury he suffered at the Carnahan rally while beating Ken Gladney’s a$$.

Here again is McGowan “at work” in August:

This, also from 24th State, was posted at the The Community Arts Media Project. Elston is asking for donations to cover his expenses: 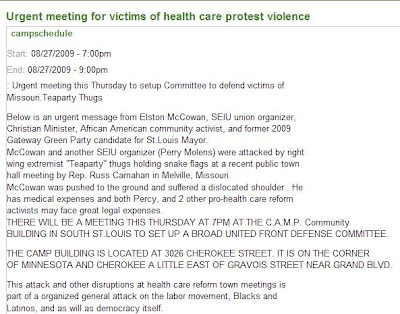