The first day of fall brought snow to Colorado. 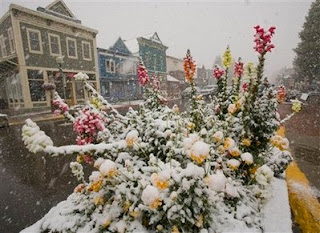 Let’s take our chances.
Obama told the UN today to act on non-existent global warming or face an “irreversible catastrophe.”
He may be late to the table…
Even The New York Times is now reporting that global temperatures have been stable for a decade and may even drop in the next few years.

A failure to address climate change could create an “irreversible catastrophe,” President Obama warned Tuesday in a speech at the United Nations in New York City.

“No nation, however large or small, wealthy or poor, can escape the impact of climate change,” the president said.

Obama said time is “running out” to fix the problem but that, “we can reverse it.”

But the United States has been greeted with skepticism on pledges to advance climate change legislation.

A sweeping climate change bill passed the House this year, but it has been held up in the Senate as health care reform dominates the domestic agenda in Washington.

Climate change ranks dead last in a nationwide poll– Only 2% call it America’s most pressing issue.