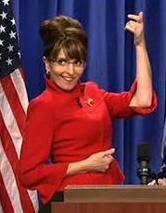 Who would have guessed it?
The state-run media awarded Tina Fey with yet another award for her spoof on Sarah Palin– nearly a year after the election.
Her sacrifice for the state continues to pay off for this liberal actress.
Entertainment Weekly reported:

Justin Timberlake and Tina Fey each took home the gold at Saturday’s Creative Arts Emmys, the TV Academy’s walk-up to the Primetime Emmys Sept. 20 on CBS, Variety reports. Fey got a shout-out in the guest actress in a comedy category for her SNL spoof of Sarah Palin while Timberlake won for hosting the late-night NBC show. In the guest drama categories, Ellen Burstyn won an Emmy for appearing on Law & Order: Special Victims Unit and Michael J. Fox also earned one for his memorable turn on Rescue Me.

This follows her December 2008 entertainment of the year award.