Barack Obama last night included the story of a Waxahachie woman’s breast cancer nightmare in his speech to Congress. Obama said the evil insurance company canceled her policy for failing to report a pre-existing condition: acne:

“…More and more Americans pay their premiums, only to discover that their insurance company has dropped their coverage when they get sick, or won’t pay the full cost of care. It happens every day…. [A] woman from Texas was about to get a double mastectomy when her insurance company canceled her policy because she forgot to declare a case of acne. By the time she had her insurance reinstated, her breast cancer more than doubled in size. That is heart-breaking, it is wrong, and no one should be treated that way in the United States of America.”

But, of course, Barack Obama forgot to mention a couple of things… 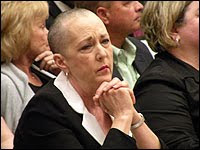 Robin Beaton’s insurance company retroactively canceled her policy because she had failed to inform them of her history of acne and a rapid heartbeat.

First of all, the woman, Robin Beaton, had her insurance canceled not because of her acne condition. She also had a heart condition she knew about and hid this from her insurance company:

One of Barton’s constituents, Robin Beaton of Waxahachie, Texas, did know that her health history included acne and a rapid heartbeat. But she didn’t think they were relevant to her current health and left them off her application.

Obama forgot to mention this in his talk.

Also, President Obama forgot to mention that the breast cancer survival rate is much greater here in the United States than in countries with socialized medicine.

Obama forgot to mention this, too.
Now, what was it Rep. Wilson was saying about Obama again?