Is this really news?
Isn’t it common knowledge that Obama was weaned on socialist dogma and prayed at a radical hate-filled church that preached black liberation theology?
Then why is this a headline at the Telegraph? 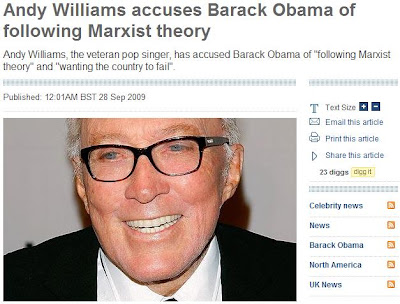 Williams, a lifelong Republican whose hits include Moon River and Music To Watch Girls By, told the Radio Times he thought Mr Obama wanted to turn the US into a “socialist country”.

The 81-year-old was a friend of the Kennedy family during the 1960s and was present at the Los Angeles rally where Robert F Kennedy was assassinated in 1968.

“I was very close to Bobby and he asked me to be a delegate for him when he ran for president,” he said.

“He knew about me being a Republican, but just laughed and said, ‘Sign yourself in as a Democrat and then change back afterwards’. Sadly, I never got to do that.

“I was very close to Teddy Kennedy, too, and his death recently brought it all back. What a tragedy. Had he lived, I think Bobby would have been a great president.”

But Williams had a less favourable opinion of the current president.

“Don’t like him at all,” he said, “I think he wants to create a socialist country. The people he associates with are very Left-wing. One is registered as a Communist.

“Obama is following Marxist theory. He’s taken over the banks and the car industry. He wants the country to fail.”

This makes me want to book a trip to Branson.