“If you’re an Republican Congressman outraged with the idea that there might be racist undertones to some of the reactionary opposition to Barack Obama’s presidency, then don’t make jokes about how you’re like a golfer at the mercy of a monkey.”

They then sent this around to their cronies in the state-run media: 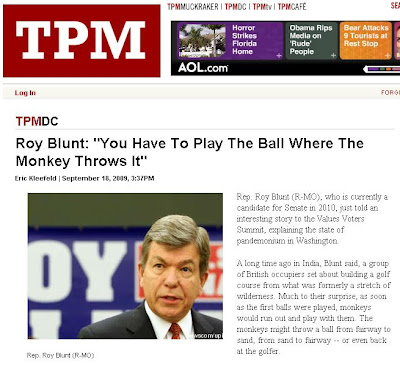 TPM reported the story on Friday.

Unfortunately for the Carnahan Clan, this wasn’t a racist remark. Rep. Blunt cracked the same joke in a speech in 2006 at the Heritage Foundation long before Barack Obama was on the scene.
Jim at 24th State found the video and has more on the racist charges:
( At about the 2:25 mark)

Rep. Blunt told Dana Loesch on her talk show last night that he has used the joke several times and this was just a Carnahan created hit-piece to smear him as a racist.
Bummer for the Carnahans.

Roy Blunt didn’t equate Obama to a monkey.
…The Carnahans did.

The Carnahan family really ought to apologize to Representative Blunt and President Obama for this outrageous accusation.

More… Roy Blunt fought back against the Carnahan smears last night on The Dana Show.
The audio is here and Dana added this:

It was an anecdote about facing adversity in life – a story about monkeys – and the first thing they (the Carnahans) thought of was our President and people of color. That was the first thing that popped into their mind. I’m not making this up. Psychologists often employ word association to gauge a person’s character; I’d say that immediately thinking of President Obama when hearing something so non sequitur suggests a seriously racist character. In their attempt to falsely play the race card, Fired Up and the Carnahans just showed their entire backside.

UPDATE: More bad news for the Carnahans… There’s even a 2001 book by the title “Play the Ball Where the Monkey Drops It“ 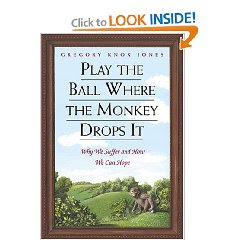