They call him “Lucky”…
Back in the fall of 2006 Lance Cpl. John McClellan, a Missourian, was shot by a sniper in Iraq.
The Stars and Stripes reported the story:

The third time he was shot was the luckiest day of Lance Cpl. John McClellan’s life. A sniper’s bullet somehow flew barely under the Marine’s helmet, hitting just above his left ear. It severed facial nerves and parts of his ear, ripped a hole in the lower section of his skull and brain, and tore its way out through the back of his neck.

But it missed his carotid artery by the thickness of a few sheets of paper. And it missed vital sections of his brain. It missed his vision and vocal controls, too.

And it didn’t kill him…

McClellan started his recovery at a rehabilitation center in Florida, and his family was thanking God and the military medical system for his survival. Doctors told his family that 99 of 100 patients with similar injuries die.
But he was the other one. 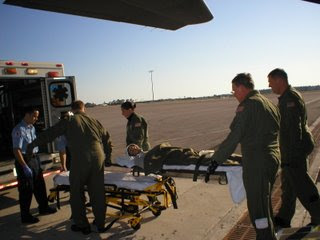 John, “Lucky” McClellan, is moved into an ambulance in Tampa.

He had been in Haditha for less than a month when that third time came.

“I really don’t remember any of it,” he said. “I was standing post in a tower with another guy. The next thing I remember is waking up in Bethesda three days later.”

The Marines told him an unlucky shot from a hidden sniper took him down. As corpsmen rushed to McClellan’s aid, his teammates delivered a fatal volley to that shooter.

In those missing three days, McClellan was sped from the tower triage to an field hospital, then to Germany and back to the National Naval Medical Center in Maryland. He has gotten a chance to thank a few of the doctors who worked on him, but most of them never saw him conscious. 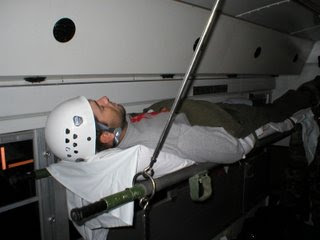 The ambulance from Bethesda to Tampa, Florida where John started his recovery.

Over the past few years I have received updates on John’s recovery from his mother Connie. Connie sent out this email back in November 2006:

Yesterday, John walked 380 steps in his walker. The day before was 300; before that 200; before that 150; before that 80. EVERY day he’s gaining more strength and more balance. Yesterday he was able to stand without assistance, and without losing his balance for over 10 seconds. That doesn’t sound like much to us, but trust me that is HUGE!

She asked for prayers.

In January 2007 while he was still re-learning how to walk, John was honored by Missouri State Governor Matt Blunt for his service. He received a 2-minute-long standing ovation in the Missouri House. John continued his rehabilitation and Connie continued to send updates.

This weekend I met Connie for the first time.
She drove up to the Quincy Tea Party from Columbia, Missouri. It was one of the highlights from my weekend. 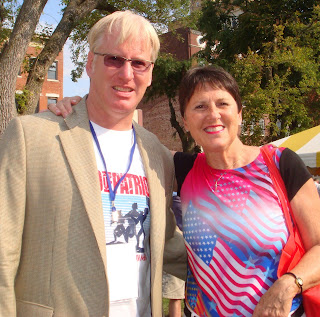 Connie and me in Quincy.

Connie was excited to tell me that John is now enrolled in school. He is leading his class. Her prayers had been answered. 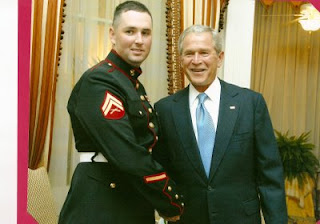 In October 2008, John McClellan with President Bush in Washington DC.

It was nice to finally meet Connie.

** You can read more on LCpl John McClellan at My Miracle Marine.