Maxine Waters: Media Should Probe the "Birthers & Teabaggers" at Rallies 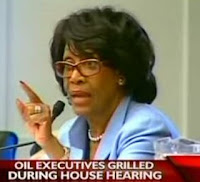 Despicable Rep. Maxine Waters today said that the media should investigate the “birthers and teabaggers” at the rallies like the massive rally last weekend.
“Teabagger“, of course, is a offensive sexual term used by liberals to describe the freedom protesters who are against the record government spending.
The Hill reported:

The media should investigate the racial views of conservative activists like the ones who descended on Washington last weekend, one liberal congresswoman said Wednesday.

Rep. Maxine Waters (D-Calif.) said that it’s not enough for African-Americans to levy allegations of racism against the right-leaning protesters, and that the media must look into their views.

“I want those people talked to; I want them interviewed,” Waters told the liberal Bill Press Radio show in a podcast. “I want journalists to be all over those rallies and the marches with the birthers and the teabaggers.”

“What I’m looking for is the very people who carry the signs who are referring to the policies in very, very strange ways like ‘Obamacare’ and ‘Bury Obamacare with Kennedy,'” she said. “What I’ve been interested in is hearing from those people that everybody’s referring to — everybody on the Mall, in the rally.”

Last month this offensive representative called those who oppose the government takeover of health care neanderthals at a town hall meeting.