Founding Bloggers posted on Charles Johnson’s meltdown today.
I appreciate the kind words they wrote about me at their website.

As for Charles, I was tipped off last week that he is now attacking me regularly on his website. He recently called me a “a borderline illiterate bigot who thinks it’s the height of wit to post pictures of Obama as Hitler.”

He’s talking about the LaRouchian Obama-Hitler pictures that I posted to clarify that these nuts were not conservatives as the state-run media insisted they were.

Apparently, it’s OK for Charles to post Bush-Hitler photos but he finds it offensive if you point out that protesters carrying Obama-Hitler photos are La Rouche activists and not conservatives. 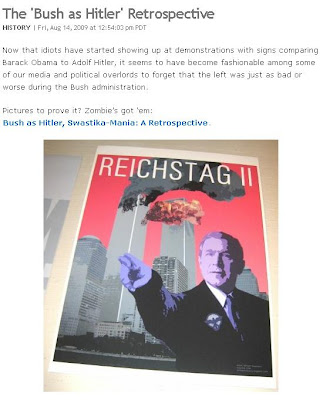 Personally, I miss the old LGF.